Originally published on HuffPo Politics on 12/3/2014

Arriving home from work last night, a strange sense of deja vu came across me while putting on the national evening news. Coverage of the San Bernardino shooting showed eerily similar scenes of prior broadcasts. Law enforcement swarming a public area with terrified bystanders running with their hands above their head. Emotionally charged individuals jumbling words during interviews as they await word of the fate of their loved ones turned victims.

Stuffed animals, helium balloons and candles placed outside a building of the newly-minted crime scene. And finally, a flurry of empty promises of action by legislators fueled by the outrage of Americans. Somehow public mass shootings and their aftermath have become as predictable as a Hollywood romantic movie, but are occurring on a more frequent basis than reruns of Law and Order: SVU.

The fears of being a casualty of a public mass shooting can longer be criticized as irrational. It is an act of domestic terrorism that knows no geological preference, nor does it discriminate against age or nationality. Americans are being terrorized by fellow citizens, their own community members.

When shootings aren’t taking over the entire news coverage, potential political candidates and current legislators are determined to drive the fear of ISIS and foreign terrorism into the hearts of American citizens. 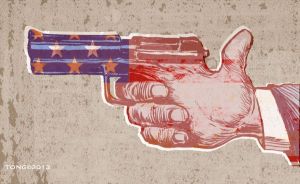 I want to hear from my government about what is being done to make it safer for me to take my niece out to lunch this weekend, or to walk through a medical office for a doctor’s appointment tomorrow. With the same sense of urgency that I have heard used in the case against allowing Syrian immigrants into the United States for fear that terrorists may be amongst them, I want to hear about the legislation being worked on to strengthen gun control laws to make it harder for a concealed weapon to be purchased by an unsuitable American citizen.

With the instances of public shootings steadily increasing, it is a glaring fact that legislation centered around gun control in the United States is failing the American people. The freedom of the American people to pursue happiness is being hijacked by the inefficient gun control. This is not about an argument about the right to bear arms as an American citizen. This is about making sure that the mentally stable and law abiding citizens of the United States are able to do so, rather than be held hostage by it.

Later this month, the sweet faces of the children that emotionally rocked our country to a core with the Sandy Hook Massacre will be remembered as the third anniversary passes. While the outcry for action was present on multiple levels, the action steps to ensure prevention of other incidents resembled more of a mumble. If the innocent blood of children and their educators right before Christmas was not enough to spur action of more efficient gun control laws, it terrifies of me of what magnitude level of horrific tragedy will have to take place to finally serve as the catalyst of change